If you are working with a drawn image you can scratch back into the film in the opaque areas to open it up so that some light can get through to partially harden the polymer in the dark areas.

If you are working with a photographic image a double exposure using a RDS can expose your dark or shadow areas and not overexpose your highlight areas.

Exposing photopolymer plates with a RDS

Photopolymer plates can be double exposed to solve the problem of deep grooves that occur when you have wash-out problems with a single exposure. The opaque areas of the film positive have prevented the light from penetrating to the photopolymer plate so what should be a dark area in the print washes out and prints like an open bite. The second exposure with a RDS allows minute dots of light through to the plate that partially set the polymer in the dark areas. When the exposure times for the first and second exposure are correct the image will have rich blacks.

You can use the RDS as your first exposure or your second exposure. I have made a test and there is only a slight difference to the finished image. Using the screen second gives a slightly sharper image, using the screen first the image is slightly softer.

There is certainly more testing involved when making double exposures, but you can achieve a print that is a more accurate translation of your original drawing or digital image.

Agfa Cristal-Raster developed a stochastic halftone that incorporates a random distribution of equally sized halftone microdots. The resulting effect when using a RDS is that the dot structure of a conventional halftone is replaced with a mezzotint type screen structure. 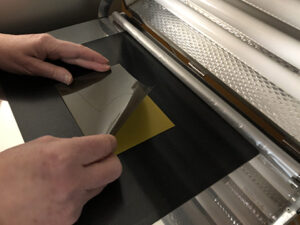 Placing a random dot screen onto the same Miraclon DS94 photopolymer plate for a shorter time to expose the dark areas in the film positive.